Oxidised Renegerated Cellulose Natural, plant based cellulose is dissolved and extruded as a continuous fibre (regeneration). The fabric made from the fibre is very uniform in chemical composition and its oxidation results in less variation in stability and absorbility of the material compared to cotton based products. CuraCel® Absorbable Haemostat is a sterile product made of oxidized regenerated cellulose (polyoxyan hydro glucuronic acid).  The action mechanism of CuraCel® is independent from the blood coagulation mechanism of the body. When it comes into contact with blood, CuraCel® forms a brownish or black gelatinous mass which aids clot formation. This gelatinous mass acts as a physical matrix to which platelets can adhere. With platelet aggregation and formation of a platelet-fibrin plug, haemostatis occurs. 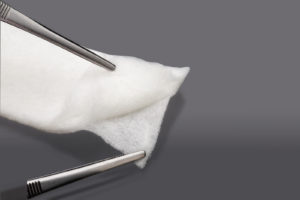 CuraSpon® is a sterile absorbable gelatin sponge with haemostatic effect suitable for the control of bleeding.

CuraSpon® is manufactured from highly purified neutral gelatin foam of uniform fine porosity which guarantees a favourable homeostasis. The gelatin sponge activates the thrombocytes at the moment blood comes in contact with the matrix of the sponge. This causes thrombocytes to release a series of substances which promote their aggregation at the same time as their surfaces change character, thus enabling them to act
as a catalyst for the formation of fibrin. 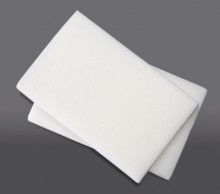 CuraSpon® provides haemostasis in surgical procedures to control capillary, venous and small arterial bleeding when binding, suturing or other conventional methods of control are impractical or ineffective.

CuraSpon® can be applied dry or moistened with sterile physiological saline. CuraSpon® is pressed against the bleeding site and within a short time it will adhere to the wound and control the bleeding. It is recommended to remove any excess CuraSpon® material from the operative field.